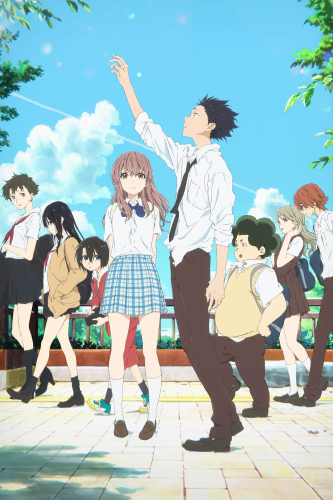 When they were children, Shouya Ishida bullied Shouko Nishimiya because she was deaf.
Once the bullying was reported, everyone blames him and starts bullying him, causing him to become anti-social and unable to see people’s faces.
When he understood the situation, he learned sign language and wanted to apologize to Shouko Nishimiya.
He also thought of committing suicide, but the meeting with Shouko Nishimiya made him change his decision.

Shouko Nishimiya was bullied by her classmates, not only by Shouya Ishida.
But despite all this, she always tries to stay positive and apologizes for being deaf.
After she meets Shouya Ishida again later, she begins to fall in love with him.

Yuzuru Nishimiya is currently a middle school student.
She cut her hair short so that their mother would not cut Shouko Nishimiya’s, and has kept it that way ever since.
Because of this, she is often mistaken for a boy, with Shouya Ishida even thinking that she is Shouko Nishimiya’s boyfriend at first.

The story begins with the main characters in primary school (~12 years old), but skips to the present shortly after.

How much time passes?

Harem?
No
Love Triangle?
Yes, or at least it seems that way. Who?

Love confession?
Well yes, but actually No. Who?

… Shouya Ishida didn’t understand it, since Shouko Nishimiya just said “Suki” (Like), but he confused it with “Tsuki” (Moon).

Kiss?
No
Will the couple get together?
No, that is not explicitly shown in the movie.

But there”s no discussion that they will, since it”s implied in the manga ending. (For more information ➜ Ending?)

(Most likely they will even marry.)

Will the couple stay together?
—
NTR?
No
NTR-Vibes?
No
Dead of a love partner?
No. Close, but fortunately not. Explanation:

Shouko Nishimiya blames herself for everyone’s problems and this leads her to hate herself and try to kill herself.

That’s why she tries to jump off a building during the festival.
But Shouya Ishida happens to see her and saves her, only for him to fall instead.
However, he does not die, Shouya Ishida only falls into a short coma.

When Shouya Ishida falls into a coma, Naoka Ueno takes care of him and prevents Shouko Nishimiya from visiting him.

Amnesia?
No
Ending?
A very emotional and happy ending. What?

(Read the spoiler “Death of a love partner?” to learn how he fell into a coma.)

Difference from the manga ending?

The manga is also a happy ending.

It just happens to be a bit different.
Instead of being at the school festival, it’s a reunion for former students.
And Shouya Ishida has the opportunity to hold Shouko Nishimiya’s hand.
There might not be a kiss or a clear confession, but you certainly will end up with a warm feeling in your chest.

In addition, in the manga Naoka Ueno becomes a model with the help of Miyoko Sahara.

Since “Eiga Koe no Katachi” is supposed to be a very dramatic anime and it doesn’t come to a clear romantic conclusion, I added it to my blacklist.
But after reading xVaDeRx’s spoilers and descriptions about it, I’ll probably watch this anime myself at a later time and then check if I should remove it from my blacklist.

“It’s awesome, but well Kyoto Animations has never disappointed me.
The colors are used to clearly express the feelings in the scene.
It’s just amazing that everything was thought of, because usually the music or OST is a very strong influence in this genre.
But if I were deaf, I could definitely feel it just by the colors used.”

Thank you for providing information about ‘Eiga Koe no Katachi‘ for me.