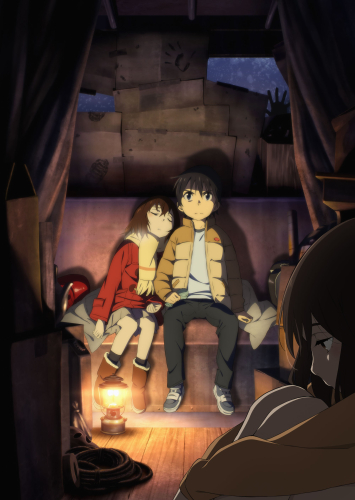 Kayo Hinazuki had developed feelings for Satoru Fujinuma, and at first it might look like she would end up with him.
But as soon as she is safe and he falls into a coma, she is admitted and cared for by the child protection authorities.
She often visited Satoru Fujinuma in the hospital, praying for him to wake up soon.
The mother of Satoru Fujinuma could no longer bear that Kayo Hinazuki wasted her life like that.
She transported him to a hospital in Chiba without informing Kayo Hinazuki, leaving only a letter of thanks for her support, but with the request for Kayo Hinazuki to cherish her “present” so that she could have a bright future.

(For more information ➜ Will the couple get together?)

The Age gap needs a bit of explaination, because time traveling takes a big role in this anime.

So after he wakes up from the coma, Kayo Hinazuki visits him and then there is no age gap anymore.
They are then the same age. (They even have their birthday on the same day)

In the end, Satoru Fujinuma returns to his true timeline, where he is actually 26 years old.

This confuses me a bit, but was Satoru Fujinuma 26 years old the whole time?
Or is he only 26 years old physically, but he is 29 years old mentally?

Harem?
No
Love Triangle?
No
Interruptions at
Kiss?

Love confession?
No
Kiss?
No
Will the couple get together?
No

In the very end, Satoru Fujinuma and Kayo Hinazuki do not become a couple, although they have been through a lot together. But at the end… 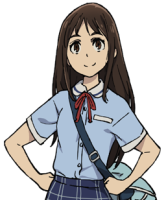 In the last scene of Erased it looks like Satoru Fujinuma and Airi Katagiri will get closer in the future.
It’s not sure, but it’s pretty obvious that they maybe will come together.

Will the couple stay together?
—
NTR?

Well, since the anime shows how the relationship between Satoru Fujinuma and Kayo Hinazuki developed and made it quite obvious that the two should end up together at the end, then this is definitely a: Yes

Satoru Fujinuma wakes up from coma and is visited by Kayo Hinazuki.
And surprise surprise, she appears with her son she had with her husband.

Dead of a love partner?
No
Amnesia?
Yes, but only temporarily. Who?

So, regarding the romance between the main couple it is a bad end.
If you thought like me that the couple will get together, the anime will leave you hanging.

But in general the ending is a happy ending.
Even though Satoru falls into a coma, he manages to save his friend and everybody lifes happily.
Once he wakes up (represented as destiny), he meets Airi Katagiri under a bridge, which implies that they could end up together.

Since my taboo facts are very strong in this anime, this anime is added to my blacklist.

– Besides, Relationship with age gap is hinted at the end.

Great.
As an audiovisual producer (xVaDeRx) I can say with full confidence that the work that went into this anime was done very well.
It may not seem like a big deal, but that’s for sure the goal.
The anime looks cold, dark and scary sad.
Just by the looking, it just simply plays with your feelings.

The main character is a struggling manga author with a supernatural power.
This enables, or rather, forces him to prevent deaths and catastrophes that happen near him by sending him back in time when an accident occurs, repeating the scene until the accident is prevented.

The main heroine is abused by her mother and is also the first victim of the serial killer.
Satoru Fujinuma tries to get closer to her in order to prevent her from being murdered.

She is Satoru Fujinuma’s mom and has nothing to do with romance, but just wanted to express how important and well done her character is in the story.
In the first timeline, Sachiko Fujinuma is killed as soon as she has found out the identity of the serial killer.
Therefore the power of “revival” is a gift to Satoru Fujinuma.

Well, the opinions about the end of the anime differ from each other.

Even Vaders and my opinion is different.

Vaders opinion:
“It can be seen as a happy ending unless you were rooting for the Satoru Fujinuma x Kayo Hinazuki shipping, since she ends up married with a different guy and even had a child.
But no blame can be placed on her, since Satoru Fujinuma was in a coma for about 15 years.
Once you reach the end, you have a satisfying feeling and you gladly smile, because you can see how after so much effort everyone got what they deserved (in a positive way)”.

From my side (and also the reason why the anime is on the blacklist), I consider this a bad (NTR) end.

During the whole anime we get to see, how Satoru Fujinuma and Kayo Hinazuki will spend a lot of time together, how they slowly develop feelings for each other (maybe a little more from Kayo Hinazuki’s side), and how he tries his best to save her life.
And then boom, at the end we suddenly get Kayo Hinazuki with a different guy (who was completely irrelevant in the anime).
That is kind of a big surprise. A big bad surprise, from my point of view.

Yes, I get it, I know that he was in a coma for 15 years and she had to move on. So it is more realistic and logical.

Don’t get me wrong, I certainly understand this point of view and it is absolutely reasonable, but… it’s a fictional story, damn it!
Leave me this wholesome happy end, which will most likely never happen in real life.
After all, that’s the purpose of fiction.

All right, the author wanted to be realistic and logical. But wait, what is that?

A funny comment I read somewhere:
“The serial killer was more loyal than Kayo Hinazuki, expecting Satoru Fujinuma to wake up from his coma.”

Hmmm.. Now the author goes back and makes it illogical and fictional again?
Then Sachiko Fujinuma could also have dropped the relocation of Satoru Fujinuma, and Kayo Hinazuki would still be at his side.

And why at all, did Satoru Fujinuma have to be in a coma for such a long time?
If he had woken up earlier, the whole drama could have been avoided.

These are some questionable aspects I have for the end.

Not only that, but in the end the anime also even tries to hint that Satoru Fujinuma might end up with a girl 12! years younger. Really?

In my opinion, it would also have had a stronger impact if Satoru Fujinuma’s coma had been shorter and his mother had not relocated him to another hospital.
And so, for example, to get a small glimpse of how Kayo Hinazuki and Sachiko Fujinuma take care of Satoru Fujinuma while he is in a coma, as well as a short side story of them.
Then, when he wakes up, there is this joyful moment of happiness for the two important women in his life.
What a waste of an opportunity here 🙁

Credit goes to: xVaDeRx
Thank you for providing information about Boku dake ga Inai Machi for me.