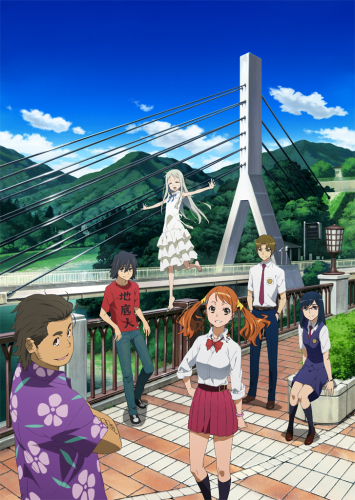 🇬🇧 AnoHana: The Flower We Saw That Day

The movie takes place one year after the first season, but is actually a retelling of the events of the first season, with new additional scenes that show different perspectives and also tell something about the plot afterwards.

Jinta Yadomi and Meiko Honma liked each other when they were kids.
But she rejected him, out of fear to divide the group of friends.

Nothing more will happen, as Meiko Honma dies after an accident.

Age gap?
No
Time skip?
No

Just some flashbacks of the past.

The main story takes place in the present.
What happens is that Meiko Honma dies when they were all about 8-9 years old, so there will be some flashbacks into the past which could may be somewhat confusing.

A man wants to force Naruko Anjou to go to a love hotel with him and grabs her butt.
Luckily, Atsumu Matsuyuki is there to save her.

Explanation about the love triangle and the love polygon:

Atsumu Matsuyuki made a love confession to Meiko Honma, when they were kids.

She quickliy apologizes and runs after the fleeing Jinta Yadomi, because she has to make sure that he is okay.

Kiss?
No
Will the couple get together?
No At the end?

At the very end, no couples are established, although they seem to like each other.
It is not certain, but it is quite obvious.
(Between: Naruko Anjou x Jinta Yadomi and Chiriko Tsurumi x Atsumu Matsuyuki)

Will they at least come together in the future?
It seems more likely in any case.

Will the couple stay together?
—
NTR?
No
NTR-Vibes?
No
Death of a love partner?
Yes

That Meiko Honma is dead is already known from the start of the anime.

Amnesia?
No
Ending?
Sad ending. What?

Meiko Honma, who is a ghost, finally reunites the group of friends together with the help of Jinta Yadomi.
After a very emotional group confession, where everyone is able to see her, she vanishes.

Anohona is a story full of drama and regret in the characters.
The love triangle/love polygon drama between the characters plays a major role thereby.
Sometimes it can be funny and sad at the same time.

Since my taboo facts are very strong presented in this anime, I added it to my blacklist.

– Besides, no romantic conclusion.

The animation is colorful, you can see that the animation team put a lot of effort into it.

The main heroine, she dies when they were all still children, which was the main reason why the group of friends split up.
She was lively and always thinking in the best for everybody.
Later she returns as a ghost to gather them together again.

She was in love with Jinta Yadomi, but feared that the group of friends would split up if she would be together with him.

The main character, after the death of Meiko Honma he starts to become reluctant and stops the relationship with the group of friends.
He is the only one who can see Meiko Honma as a ghost, and for this reason she entrusts him with the task to get everyone together again.

He was in love with Meiko before she died.

The second (main) heroine also belonged to the group of friends.
As a child she was insecure about her appearance.
So after the death of Meiko Honma and the separation from everyone, she changed her appearance to something more stylish.

She had a crush on Jinta Yadomi, but he only had eyes for Meiko Honma, which made Naruko Anjou jealous of her.
Even in the present she continues to have the same feelings for Jinta Yadomi.

As a child she was shy and always followed what the others did.
Once she has grown up, she decides to be independent from her friends and sees herself as the top.
She keeps up her relationship with Atsumu Matsuyuki, whom she somehow still loves.

Just like Naruko Anjou, she was jealous of Meiko Honma.

At the end it gets very emotional and leaves a heck of a sad feeling.
Plus, the ending song can easily make you cry.

As for the romance, it never comes to a conclusion, which leads to an awkward feeling in the heart after watching it.

Thank you for providing information about ‘Ano Hi Mita Hana no Namae o Bokutachi wa Mada Shiranai.’ for me.